Good deal bad deal. Report of the Conference "Illegal Trade in Natural Resources - What can Brussels do?" 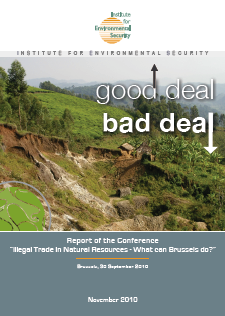 Natural resources are the backbone of the global economy. Many emerging economies are based on exporting natural resources to industrialised countries fuelling global markets in much needed raw materials. In accountable States, the income generated should be used to serve development needs, for example to finance the construction of infrastructures or programmes for poverty alleviation. However, governments sometimes lack the capacity or the legitimacy to regulate the exploitation of these assets. In these cases, natural resources can become a cause for corruption, social disputes and even violent conflicts.

The problem is well known. In countries plagued by weak governance and in conflict-ridden countries, the governments are incapable of controlling domestic resources that are being exploited criminally. These illegally extracted resources are exported owing to illegal doings of corrupt businessmen, rebels and also state and military officials. Once these goods leave their country of origin, they are often treated as legal commodities in importing countries. As Professor Wenar from King's College London puts it "the priority in reforming global commerce is not to replace free trade with fair trade. The priority is to create trade where now there is theft".