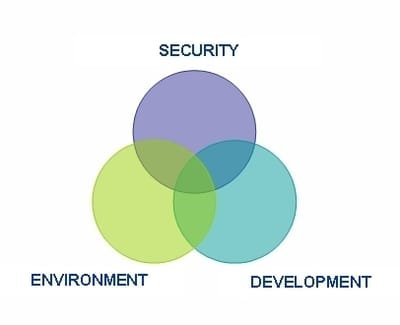 The Institute for Environmental Security launched - in 2006, in partnership with GLOBE-EU in Brussels, and others - a programme focusing on mainstreaming environmental and sustainable development factors into especially European foreign and security policy.

Working especially with Members of the European Parliament, the aim is to promote the forging and implementation of an integrated strategy for environment, sustainable development and security - or the better inclusion of environmental security aspects in the EU Common Foreign and Security Policy, European Security Strategy and European Sustainable Development Strategy.

Key issues being addressed include:

What needs to be done to promote the further mainstreaming of environmental factors into EU foreign and security policy (including energy and food security and security related to other resources such as land, water, living marine resources, and terrestrial biodiversity)?

What needs to be done to help promote the further mainstreaming of conflict prevention and livelihood protection into EU development cooperation especially in vulnerable countries?

How can military and non-military assets and resources be better deployed and co-ordinated in the pursuit of environmental protection and sustainable development policies and measures? And what additional capabilities will be needed for responding to environment-related humanitarian emergencies?

How can there be increased transatlantic cooperation on environment, sustainable development and security?

Should/could the EU conduct a global “threat assessment” of the impact of environmental degradation, in particular from climate change to 2050 and beyond, notably in terms of humanitarian and security crises resulting from resource depletion, droughts, floods, deforestation, inadequate poverty alleviation and under-development, and if so how could this be dovetailed into the EU’s external relations policies? How could energy security and climate security be pursued in tandem? How could climate mitigation and adaptation be given a higher priority in the EU’s external relations policies in practice?

Should the CFSP/CESDP aspects of the EU’s external relations policy be made more consistent and coherent with its trade, aid, development and international environment policies and if so, by means of what institutional or legal mechanisms could this be achieved?
Which of the individual sectoral policies (agricultural and rural development; health policy; energy policy and technology transfer; trade liberalisation etc.) are most likely to be decisive in combating poverty and reducing insecurity and instability in the world’s most vulnerable developing countries?

Four working groups were set up to review current policies and best practices and seek to identify gaps in European and international policy and action with respect to four stages in the conflict cycle:

Group B: Preventing Conflict - Policy instruments and measures for areas of escalating tensions and for conflict prevention (military and non-military).

Group C: Building Peace - Crisis management and resolution in the event of conflict (military and non-military).

... and the interface among all three.

The starting point for the groups will be to review the Report and Resolution on Environment, Security and Foreign Affairs adopted by the European Parliament on 28 January 1999 and the subsequent actions in this field by the European Commission.

Working especially with GLOBE-EU Members of the European Parliament, the groups presented their proposals for political action by the European institutions and Member States at a conference on Greening Foreign and Security Policy: The Role of Europe held in Brussels on 6-7 December 2006.

For more information about the working groups visit the GFSP blog. 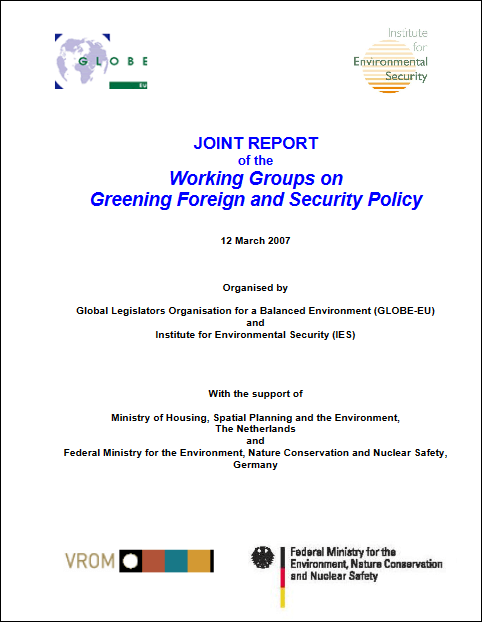 It is increasingly clear that environmental change and struggles over control of natural resources can threaten global, national and human security. As a consequence, effective conflict prevention policies need to incorporate environmental and natural resource management. Key concerns include deforestation and desertification, and land and water scarcities. In addition, climate change is rapidly becoming an unambiguous reality. >> Download the Report 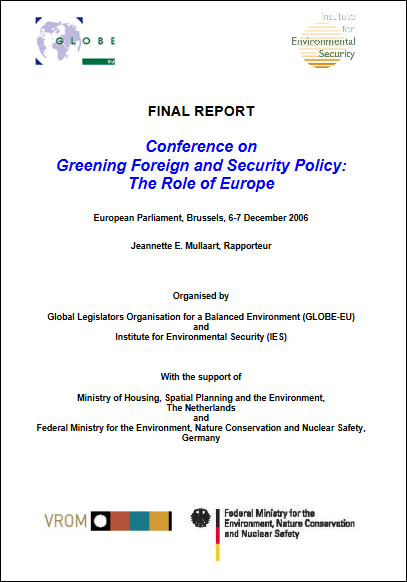 With the May symposium, the inventory of policies and practices and the draft reportsof the working groups serving as a background, GLOBE-EU and IES convened theDecember conference with the main objective being to promote the better integrationof environment and sustainable development concerns and objectives into Europeanforeign and security policy and programmes.
The event was organised as a working meeting with participants and speakers (fromthe European Council, European Commission, European Parliament, EU MemberStates, NATO, OSCE, UNDP and UNEP) reviewing the draft interim reports of theworking groups and highlighting the roles played by their respective institutions withregard to the interface between environment, security and sustainable development. >> Download the Report

Background Documents
All links are to PDF files under 100KB, unless otherwise marked.

- Resolution on the Environment, Security and Foreign Policy of the European Parliament, 28 January 1999

- Message from Margot Wallström, Commissioner for the Environment, to The Hague Conference on Environment, Security and Sustainable Development, The Peace Palace, The Hague, 9-12 May 2004

Role of the Military:
- Book Review: The Utility of Force - The Art of War in the Modern World by General Sir Rupert Smith / Reviewed by Robert Cooper

- Impact of the Military / Conflict on the Environment: Nature in War - Biodiversity Conservation by Esther Blom, Netherlands Working Group on Ecology and Development 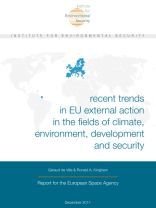 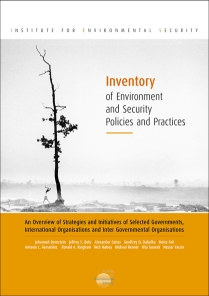 Inventory of Environment and Security Policies and Practices (IESPP): An Overview of Strategies and Initiatives of Selected Governments, International Organisations and Inter-Governmental Organisations
IES, The Hague, October 2006

This report provides an easy to use comparative overview of existing governmental and inter-governmental positions and actions dealing with the relationship between environment, security and sustainable development. >> Download the Report

Co-operation to Minimise the Risks Posed by a Changing Climate: Working together on the most important 21st century global security threat, Brussels, 23-24 September 2013

Environmental Dimensions of Security - The Next Steps of ENVSEC, Brussels, 13 November 2008

The impact of the US Elections on Transatlantic Relations, Brussels, 12 November 2008

Symposium on Sustainable Development and Security, Brussels, 31 May 2006

Forum on Environment, Conflict and Cooperation, The Hague, 7 March 2006

The Hague Conference on Environment, Security and Sustainable Development, The Hague, 9-12 May 2004