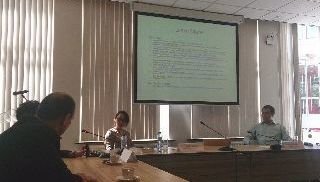 During a sunny Friday afternoon at the Asser Institute, Antoine Duval and Ryan Gauthier, speaker and commentator respectively, examined in detail the "dark" environmental legacy of Sochi.

Sochi was rated with one of the lowest grades for "environmental conditions and impact" at a minimum grade of 4.9/10 and a maximum grade of 6.6/10. Reports surfaced that environmental activists who went up against Sochi were persecuted and despite promises to clean up after the games ended, no real plans were introduced to clean up the environmental damage left behind. Both Duval and Gauthier highlighted the constitutional significance of the Olympics Charter and how it could be a powerful tool to ensure a sustainable and ecologically friendly Olympics games. However, despite the draconian rules within the Charter that apply to all athletes and participants, the International Olympic Committee (IOC) appears to be a toothless tiger when it comes to upholding certain human rights and environmental standards as it lacks the political will to take the Charter more seriously.

Two proposals were put forth by Duval as to how the Charter could be taken more seriously. He proposed an ex ante and an ex post approach. As regards the former, the IOC could raise the relative weighing of the environmental criteria early in the selection process of the candidate cities. The weighing currently stands at just 5.7% of the final mark. On the other hand, the ex post approach would be to use the Host-City Contract as a tool to set the necessary technical details on how to monitor the compliance with the Charter. The second proposal under this approach include creating a monitoring body that is composed of members of the Olympic family and independent observers, such as NGO's and international organizations and devising effective deterrents, such as fines and the threat to withdraw a city from the games. Gauthier pointed out that this has been done before by the IOC in the 70's.

In closing, a more positive outlook was presented as the audience were informed of the Olympic Agenda 2020 where the Norway and Sweden have already put forth some environmentally-minded contributions. Based on how Sochi fared, one can be certain that more public pressure will arise in the next Olympic games in Rio de Janeiro.