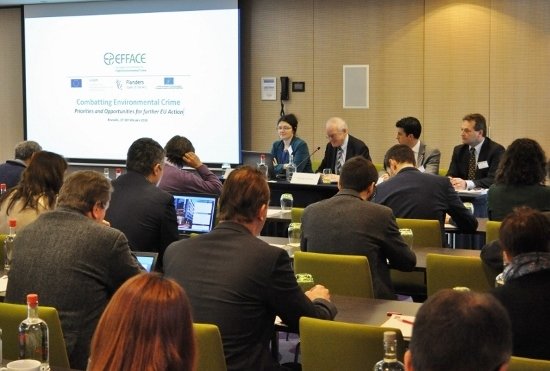 More than 100 participants met in Brussels for the final event of the EFFACE project. This conference brought together stakeholders from universities, governments and NGOs to highlight the conclusions and recommendations to be brought forward from the 40-month joint research.

Moderator Wouter Veening, president of EFFACE partner organisation the Institute for Environmental Security, opened the 17 Feb. meeting recognising that the final stage of the project is aimed at translating 40 months of academic research into political action and policy. Furthermore, environmental crime is a serious and complex crime that requires the allocation of adequate resources at national, EU and international levels.

Speakers at the opening session addressed the progress of the project and concerns from experts in the field.

Christiane Gerstetter, Senior Fellow, Ecologic Institute / EFFACE Coordinator: Lawyers argue that an environmental crime has to be something illegal, while criminologists could say it needs to involve a certain amount of harm. Despite the difficulty to find statistics on something that is hidden by nature, the EFFACE project has worked with case studies in which information was available, and translated these case studies to policy recommendations.

Rob White, Professor of Criminology, School of Sociology and Social Work, University of Tasmania / Member, EFFACE Advisory Board: Ecocide was withdrawn from the Rome Statute at the very last moment. But many people try to revive the concept and it can be very relevant. It is not the same as homicide, suicide or genocide but it has overlaps with all three. To combat environmental crime it’s not just about having a big stick but to use it systematically. One effective tool was to add community service to monetary fines. A CEO of a polluting company may find a USD 330,000 fine worth the pollution, but 400 hours of community service is a lot more costly for this CEO.

The illegal waste afternoon working group examined how Improved data collection, incompatibility of data between MS and barriers to sharing data are problems. However, these suggestions even if systematic do not help the fact that the very illegality of illegal waste is that it is not reported on. MS report annually on legal shipments of waste but these are unreliable. Illegal data does not become known through data gathering. Targeted specific actions are needed, such as IMPEL joint networks and the DEMETER project. This remains a challenge.

The wildlife-related crime working group emphasised a need for co-ordination between government agencies and other stakeholders, such as shared information systems and joint planning. The possibility of EU-wide inspectors was brought up, with the potential of developing an operational handbook that could be translated into local languages. In such multi-stakeholder interactions, it was also stated that the role of NGOs in working with governments can help the identification and dissemination of information. On environmental crime data, one participant said, “Let’s put more money in Europol to get good data on environmental crime, process it and then propose some priorities to the EC”.

The mining and other corporate pollution crimes working group noted one example that while mining is Armenia’s biggest threat to the environment, the country's environmental protection laws are vague, convoluted, contradictory and outdated. On top of that, decrees are sometimes issued that override formal laws. There is widespread corruption and merging of political power with economic power. Despite all this, there have been a few successful cases of legal cases that protected the environment – but on mining projects it is even more difficult, and so far, the international community has turned a blind eye on environmental crimes in Armenia.

The programme includes sessions on:

Priorities for further action by the EU; and

For further information, please visit the EFFACE website at efface.eu

See also a report on Day 2 of the EFFACE Final Conference. | Photos from the EFFACE final conference