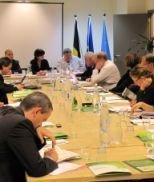 The Environment and Security Partners' meeting at the UN House in Brussels on October 5, 2011 brought together 54 representatives of EU institutions, EU member states, and United Nations agencies as well as other international organizations. The meeting was aimed to discuss the challenges and opportunities for addressing environmental and security risks in the four regions where the ENVSEC Initiative operates, namely Eastern Europe, South Eastern Europe, South Caucasus and Central Asia. The meeting, co-chaired by the Government of Finland (ENVSEC major donor) and OSCE (the Chair of ENVSEC Initiative in 2011), explored synergies between the policies and programmes of various actors in the field and highlighted the need for cooperation and partnerships for tackling complex issues such as competition over scarce natural resources and long-term impacts of climate change. The participants also highlighted the demand driven character of the work, the co-ownership of the countries concerned, and the strong complementarities between ENVSEC Partners, OSCE, REC, UNDP, UNEP, UNECE and NATO as associated partner.

Moreover, the roundtable discussion facilitated by the Government of Finland and the International Water Management Institute encouraged an interactive exchange of views on the current state of play of international cooperation in environment and security and experiences on how the environment and security approach works in responding to crises and security threats. The meeting also allowed to present the hot spot approach on the Amu Darya River Basin model in Central Asia, valued support for the shared basin management and preventing natural and man made disasters in Eastern Europe, as well as the benefits of strengthening civil society engagement in environment and security: the Aahrus Centres and CASE in Southern Caucasus and knowledge share on Mining for Closure in South Eastern Europe.