Climate Change and the Role of the Military 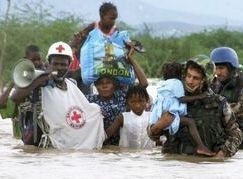 On 4 July 2011, an interview with Major General (ret) Muniruzzaman, President, Bangladesh Institute of Peace and Security Studies, Bangladesh and member of the IES Military Advisory Council (MAC) on Climate Change, appeared on The Third Pole website in which he talks about the role of the military in responding to climate change, and the looming issue of climate refugees.

According to Major General Muniruzzaman ?there is a growing realisation internationally that climate change is becoming a security issue in many parts of the world.?

On the role of the military he said that ?The military can handle situations that involve migratory patterns of people due to climate conditions. When there is a disease pandemic, or when emergency shelter and water is needed, there are a host of things that can best be handled by the military. They can also prevent conflict in destabilised areas. But the military cannot do this alone; they must be part of wider state response mechanisms. Mobilisation of civil society, government, [domestic] NGOs and international NGOs will have to take place, but the military should be a large part of it.?

In concluding the interview the Major General spoke about the kinds of security challenges the world is facing pointing out that ?We are ultimately talking about ? comprehensive security. There are other security challenges facing citizens: such as food, water, energy and a host of others. So we have to balance our security spending to ensure our people are safe. Unfortunately, global economies don't work in this manner, and internationally, politics don't allow us to behave in that manner. But many people realise that we have to reduce spending on hard military and build more resilience and a comprehensive security strategy.?

Full text of the interview