Symposium on Sustainable Development and Security 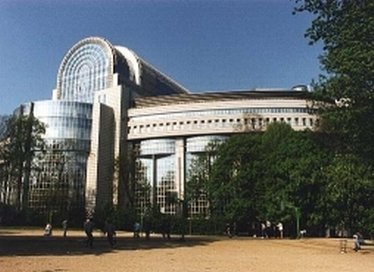 Symposium on Sustainable Development and Security:Challenges and Opportunities

GLOBE-EU and IES co-organised a Symposium on Sustainable Development and Security: Challenges and Opportunities at the European Parliament in Brussels on 31 May 2006. The meeting was called to help initiate a political process to promote the better integration of environment and sustainable development into European foreign and security policies.

The symposium was the first in a series of activities within the programme on Greening European Security initiated by the IES in cooperation with Adelphi Research in Berlin, GLOBE-EU in Brussels and others.

The aim of the symposium was to raise political issues with interested Members of the European Parliament related to improving the integration of environmental and development concerns, notably Climate Change, into the EU's existing Common Foreign and Security Policy (CFSP) and the European Security Strategy.

Symposium participants included MEPs, EU officials, and representatives of governments and international organisations (NATO, OSCE, and UNEP) as well as NGO representatives and other policy researchers and experts involved with foreign, defence, environment and development policy.

Among the speakers were (left to right): Karl Von Wogau, MEP, Chairman of the Defence Sub-Committee of the European Parliament; Robert Cooper, Director-General for External and Politico Military Affairs, Council of the European Union; and Chris Flavin, President of the Worldwatch Institute.

Four working groups were set up to review current policies and best practices and seek to identify gaps in European and international policy and action. The groups will present their proposals for political action by the European institutions and Member States at a Conference on Greening European Security to be held at the Peace Palace in The Hague, The Netherlands in December 2006.