On 6 October 2008 over 70 representatives from the worlds of conservation and security met at the Roundtable Workshop on Environment and Security at the IUCN World Conservation Congress in Barcelona. The roundtable workshop was organised by the IUCN Commission on Environmental Economic and Social Policy and the IUCN Commission on Education and Communication in partnership with the Institute for Environmental Security (IES). Participants exchanged their views on current and upcoming environmental security challenges and explored common grounds for further cooperation.

Both worlds shared the vision that environmental issues and in particular climate change are a major security challenge for all nations. Both worlds have a role to play in combating climate change and participants values the bringing of the two sides together. The two worlds have different cultures, but may benefit from each othersÂ’ knowledge, competences and capacities. The conservation community could play a role as an early warning network for the security community and may add knowledge for planning war games and developing security scenarios. The military have the capability to react quickly in case of natural disasters and their scenario planning could include attention to climate change adaptation and mitigation. 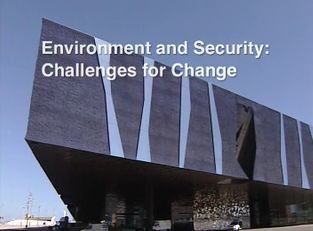 There was a consensus among the participants that cooperation on environment and security must go beyond reduction of the environmental impact of the military to include, for example, early warning and interaction on the management of environmental problems that may lead to, or aggravate, conflict. A number of promising opportunities for cooperation were identified, particularly with regard to sharing expertise and information, joint scenario exercises and public diplomacy events to put the issue higher on the agenda of decision makers.

Military leaders from the Ecuador, Mauritania, Nepal, the Netherlands, Thailand and the United States offered insights with regard to how environmental issues affect the security situation of their countries and peacekeeping missions. Contributions from these and other participants made clear that the impact of environmental issues on security is large and increasing, but that this these issues do not yet receive the attention required as they typically compete for attention with a large number of other pressing challenges.

The formal sessions of the round table and the informal discussions during the reception afterwards generated a number of recommendations for next steps to bring the two worlds closer together. One suggestion was to organise a joint workshop during the next IUCN World Conservation Congress where experts from both worlds could together engage in war games and deepen scenarios. There were ideas about how to increase attention to environment and security on the agenda of NATO, to develop distance education courses on the ecosystem approach and sustainable development for peace keeping troops and to organise a joint campaign to influence the Copenhagen climate change negotiations.

In partnership with the two IUCN Commissions and the US-based CNA Corporation, IES is taking the lead to facilitate the next steps within the context of its programme on "Climate Change and International Security" (CCIS).