4th Meeting of The Hague Roundtable on Climate & Security 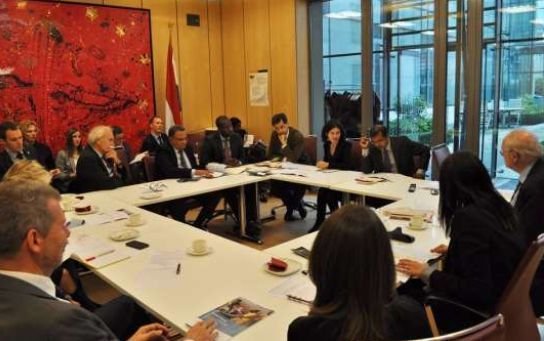 The  fourth  meeting  of  The  Hague  Roundtable  on  Climate  and  Security  was held  at  the  Embassy  of Canada  to  the Netherlands  on  25  October  2016. Canadian  Embassy  Chargé d' affaires, Ms Gallit Dobner, welcomed  representatives of 15 countries and 8 organisations who discussed cooperation on water resources, the role of the military in humanitarian missions, and global platforms of climate and security interaction –including the Planetary Security Conference and COP 22.The meeting was moderated by Matt Luna and Wouter Veening of the Institute for Environmental Security (IES).

The  Roundtable meeting  series is  a local platform with  global  outreach for  embassy representatives  and  involved organisations to identify opportunities for positive global cooperation on climate and security issues. An initiative of the Institute for Environmental Security, the Roundtables also serve as an ongoing dialogue and a contact point to increase engagement in global initiatives such as the Planetary Security Conference in The Hague and COPs.