3rd Meeting of The Hague Roundtable on Climate & Security 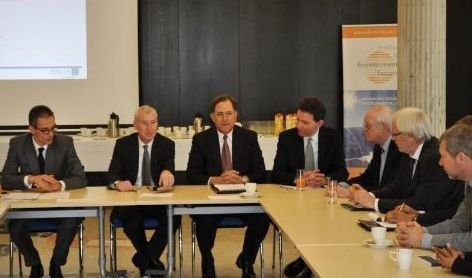 Water  scarcity,  potential  conflict,  natural  disasters  and  climate  risk  planning were among topics addressed  at The  Hague  Roundtable on Climate  and Security, hosted  by  H.E.  Mr. Franz  Josef  Kremp, Ambassador  of  Germany, on  26  April 2016.This was  the  third meeting  in  an  ongoing  international dialogue, following meetings at the Embassy of France in October 2015 and the Embassy of the United States in May 2015.

Participants at this event included Ambassadors from France, Germany and Morocco, representatives of Algeria, Australia, Canada, the Netherlands, Sudan, Tunisia, the United Kingdom, and the United States, as well as NGOs and educational institutions.

The Roundtable is a platform for embassy representatives and involved organisations to identify opportunities for positive  global cooperation on climate and  security issues.The meetings also serve as an ongoing dialogue and a contact point to increase engagement in global initiatives such as the COP Climate Change Conferences and the Planetary Security Conference in The Hague.