2nd Meeting of The Hague Roundtable on Climate & Security 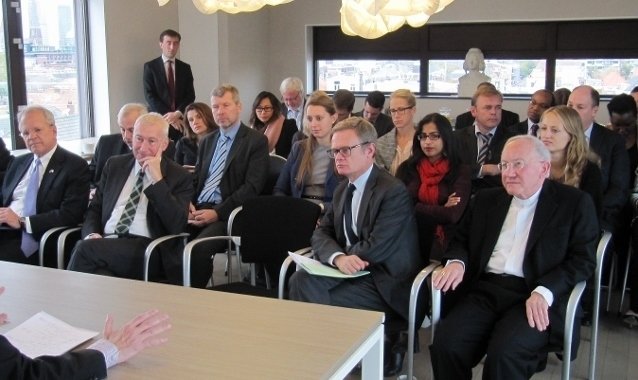 2nd Meeting of The Hague Roundtable on Climate & Security was held at the Embassy of France to the Netherlands on 14 October 2015.

The meeting came at a key moment as The Hague is positioned to become an international venue for climate-security action with the 2-3 November Planetary Security Conference at the Peace Palace, as a milestone on the road toward the COP 21 in Paris –which should achieve global agreements on future action.

Ambassadors from France, Germany, the United States and The Holy See addressed participants as IES held its second meeting of "The Hague Roundtable on Climate and Security" on 14 Oct. at the French Embassy. H.E. Mr. Laurent Pic, Ambassador of France, hosted the meeting in which representatives from ten countries and climate officials from the Dutch Government took part in an active exchange of ideas on climate cooperation leading up to COP 21 Paris and the Planetary Security Conference at the Peace Palace in November.

U.S. Ambassador Broas said in his remarks, "It is always difficult to talk about climate change because there is so much at stake. Yet no country should be forced to confront it alone. We are very thankful to French leadership in hosting COP 21. And we are thankful to the Dutch government for taking the initiative to host a planetary security conference in The Hague in just a few weeks. As we gear up for COP 21 in December, let’s keep working together to make climate change an issue no government, business, or citizen can ignore."

The Hague Roundtable is a meeting initiative for government representatives to come together to share information and strategies in addressing the linkages between emerging climate risks and issues such as natural resource availability, migration, disaster response, conflict and stability of fragile states. These risks can also be opportunities for regional cooperation, peace-building, and engagement in the urgency of international agreements.