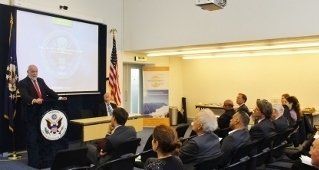 The Institute for Environmental Security (IES) in cooperation with the U.S. Embassy in The Hague highlighted climate change risks to human security, and possible actions to mitigate emerging and present dangers at an event in The Hague on 27 May. Some 40 guests came from various embassies in The Hague, the Dutch Government, the Holy See and prominent stakeholder organizations to attend the meeting.

Methods of actively engaging government stakeholders leading up to, and at the 2015 COP 21 in Paris was at the center of the event. While COP negotiations are focused on emissions and long-term goals, immediate climate-related risks such as drought, mass migration, extreme weather events, rising sea-levels and water conflict should be addressed with more urgency in global platforms. A primary aim is to gain support for the formulation of policy-based approaches that can increase political and social stability – particularly in fragile states of regions already experiencing more extreme climate effects.

Activities of the Global Military Advisory Council on Climate Change (GMACCC), including recent and upcoming publications, were center in the discussion. Initiated by IES in 2009, GMACCC is a global network of serving and retired military officers and institutions committed to highlighting security implications of a changing climate and advocating action to minimize risks.

Major General Muniruzzaman (Ret.) Bangladesh, GMACCC Chairman, in his presentation delivered an inclusive call to action stating also that people displaced by climate change are increasingly a potential source of recruitment for violent extremist groups. This follows remarks in May by U.S. President Barack Obama stating that “climate change constitutes a serious threat to global security, an immediate risk to our national security, and, make no mistake, it will impact how our military defends our country."

A follow-up session is planned for July to strategize on actions and partnerships that can make an impact at the COP 21 Paris. An international conference scheduled for November at the Peace Palace in The Hague, "Planetary Security: Peace and Co-operation in Times of Climate Change and Global Environmental Challenges", will present an opportunity to carry the momentum further in preparations for COP 21 and beyond.