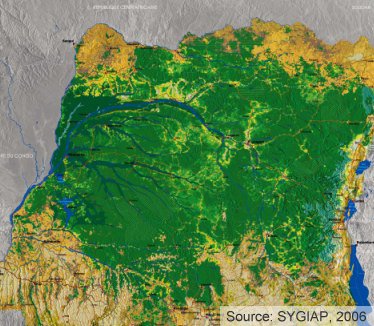 The Congo Basin forest is the second largest contiguous moist tropical forest in the world. It plays a key role in securing the livelihoods of millions of Central African citizens. The forest supplies vital regional and worldwide ecological services.

From a global perspective the Congo Basin forest is especially important with respect to the huge and unique biodiversity (more than 10,000 species of plants, 1,000 species of birds and 400 species of mammals) and the climate-relevant functions of the largely intact tropical forest.

The Congo Basin forest is spread over the territory of six countries - Cameroon, Central African Republic, Republic of Congo, Gabon, Equatorial Guinea and the Democratic Republic of Congo (DRC).

The Democratic Republic of Congo (DRC) is gradually emerging from a decade of political instability and conflict that left its institutions and infrastructure in shambles. War and civil disturbance, compounded by the sequels of a long period of economic mismanagement and corruption, have taken a heavy toll on the DRC and its 65 million people.

Despite enormous stocks of natural resources such as:

the people in the DRC are among the poorest in the world. Especially the situation of the rural population, in particular in the regions bordering immediately on the natural reserves, is marked by poverty and food insecurity.

The forests of the Congo Basin are a public heritage and key to the survival of millions of some of the world's poorest people, as well as to the global environment. In the DRC alone, more than 40 million people rely on the forest for food, medicinal plants and energy supply. In addition to their social and ecological values, the tropical forests of the country represent in particular important resources for the economic development and the related political stabilisation of the country.

The government of the DRC thus faces the enormous challenge of balancing a growing population and need for economic growth (associated with increasing needs of natural resources such as forestry, mineral and water resources), with the preservation and conservation of the Congo Basin rainforest. The rainforest is seriously threatened by (legal and illegal) logging, infrastructure and energy development, bushmeat and wildlife trade, ebola, climate change and population growth.

In recognition of the important role of the Congo Basin forest and amidst the increasing pressures facing the Congo Basin forest, many organizations work to reduce the rate of forest degradation and loss of biodiversity by supporting increased local, national, and regional natural resource management capacity. Proper monitoring could greatly help the conservation efforts currently underway. You can use our EnviroSecurity Action Guide to search for these organisations and initiatives, as well as for publications and web resources. 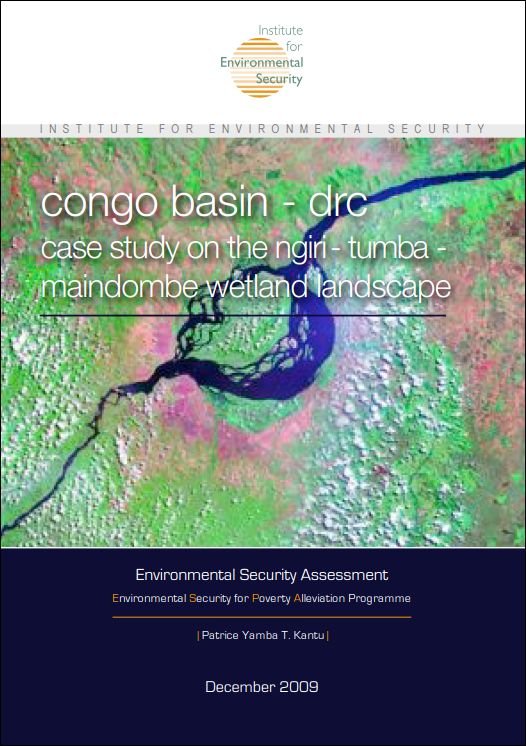 The IES and its partners have carried out an Environmental Security Assessment on the region.

The main focus is on the Ngiri-Tumba-Mai Ndombe wetland, in the western part of the DRC, bordering the Republic of Congo.