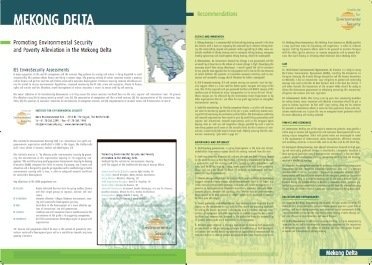 The Greater Mekong River Basin is one of the world?s most biologically diverse river basins, ranking second behind the Amazon. It possesses endangered, rare and endemic species of flora and fauna. The Mekong River innervates the region providing fresh water, nutrients, habitat and sources of livelihoods. It also provides services such as prevention and flushing out of high salinity levels from low lying areas, as well as opportunities for hydropower generation.

The Greater Mekong region, extending into China, Myanmar, Lao PDR, Thailand, Cambodia and Vietnam, is also renowned for its food exports such as rice and seafood. Many hydro-electricity dams are constructed in the Mekong River and its tributaries, and many more are planned. While progress in economic development and energy distribution has benefited some of the poor, it has also jeopardized environmental health and thus in the long run environmental security. Combined with the impacts of climate change, the lives of more than 60 million people inhabiting the lower reaches of this river basin, and millions more who rely on the ecosystem services and goods, are greatly affected.